After sleeping in late today—played two rounds of poker the following night, which I got 3rd and 4th place—and had a quite number of beers as you can see in the pics, I forced myself to lace up and step outside. Oh, it was so nice outside and I was enjoying the weather more than my run. I told myself I’ll pay another visit to my same birthday buddy, good ole George Washington. So, I ran to the capitol, then to the Washington Monument. It was really nice as there was a rich diversity of people enjoying the spring. Then, I saw Lincoln Memorial on the other end, where Martin Luther King gave his most famous speech, and was pretty surprised that it wasn’t really that far, maybe 1/2 mile away from the Washington monument, so I decided to run there, alongside the reflection pool.

I took my time and carried a leisure pace till I got home. Then, I decided to look up the Google pedometer mashup map that will tell me how many miles I’ve ran after entering the pinpoints. Check it out.

My roommate and I just signed up to run in this 10k! Now I have no excuse not to bum around and to get myself ready for this.

I was recently in a car accident and it was bad enough that my car was declared a total loss by my insurance. It’s a miracle that I walked out of the accident unscathed with some bruises, although I think the corner of my right rib may have been cracked. That I looked back, I feel like a NASCAR driver who got out of the car ok and wave hands to the fans. Intersections are dangerous, my fellows, especially when it’s on a blind hill. My car was flipped upside-down. o_O

So, that’s why you see a pic of the convertible rental car down in the photo sidebar. :-) They were all out of compact cars so they gave me the car. One friend will sell his 1993 BMW in a nice condition in abt two weeks. It needs a new muffler and some minor electronics like windows not rolling up/down and automatic locking in the driver’s door (someone tried to break in but failed.) so I will attempt to fix them, then it should be all good to go.

I’ll post up pics of my car accident shortly. Good-bye, 2004 Civic Si hatchback, you were a martyr as you saved my life. *kisses*

In the past two weeks, I’ve been running and I thought it’d be cool to sketch out my running route and show to you what my route looks like. The route involves some downhills and uphills, which actually makes it more fun and challenging too. There’s a heavy traffic at the intersection of Florida Avenue and New York Ave and I would often have to stop and wait till there is a clear path to get across the intersection. My average time seems to be approx. 35 mins and is almost 4.5 miles long. Well, you can imagine me running along by that red line on the map. :-) 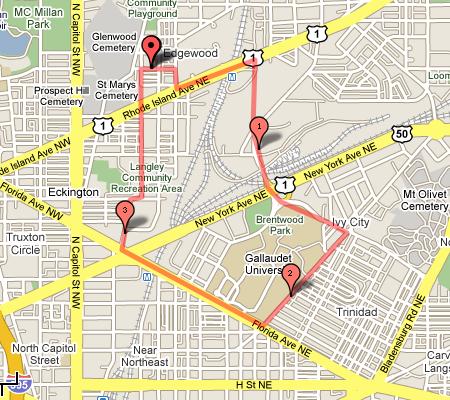