Rooster of the year and Murakami

This year marks 12th year since I wrote my first birthday post. So, I’ve completed third cycle based on the Chinese calendar. Perhaps it was in my own subconscious that I was inspired to write my first birthday post because I realize it’d be the rooster sign that year and to my own surprise, I kept up with my birthday writing and here I am, 36 years old, in my third cycle of the Chinese calendar. As you know, Lunar New Year doesn’t happen on the first day of the new year (Jan. 1) but later in the year, on January 28th. Know who has a birthday on the same day? It’s my mom’s birthday. :) All sorts of different connections there.

So, today, I turn thirty-six years old. Or 36 times around the Sun. This time, I’m closer to the 40 years old mark than I am towards 30 years old. It has that feeling of running more than halfway to the first mile on your daily treadmill run. Since average life expectancy is around 77 years old for men, 40 years is like middle age, so I’m quickly reaching that halfway point. I am a believer of the law of averages, so I expect to be deceased by the age of 80. Anything longer than that would be considered bonus to me. That’s how I shall look at my life, the scarcity of it, not that there’s anything despair about it, just how life is.

The funny part when I turned 30 years old, it wasn’t in the United States but in South Korea, where I wouldn’t have had the wildest dreams of being able to live in South Korea before that. I had thought the only time I’d be in South Korea was when I was born and that’s it. Speaking of finding my roots in South Korea, I’d come across an excerpt that I thought sums it up very well. It was none other than Haruki Murakami himself, one of my idol authors. Here’s what he has to say:

INTERVIEWER: You canâ€™t have a detective unless somethingâ€™s missing.

MURAKAMI: Right. When my protagonist misses something, he has to search for it. Heâ€™s like Odysseus. He experiences so many strange things in the course of his search…

INTERVIEWER: In the course of trying to come home.

MURAKAMI: He has to survive those experiences, and in the end he finds what he was searching for. But he is not sure itâ€™s the same thing. I think thatâ€™s the motif of my books. Where do those things come from? I donâ€™t know. It fits me. Itâ€™s the driving power of my stories: missing and searching and finding. And disappointment, a kind of new awareness of the world.

After reading that excerpt, I’ve finally found my own answer, in that I was like Odysseus trying to find his way home and to be reunited back with his family but of course, the gods kept messing around with him and one certain goddess who had taken a liking to him. After discovering my family in 2002 and having met several more, I feel like my own identity has grown more firmly, knowing where I came from and how I’ve gotten at this point, almost like how a star is born. Whenever people got curious about my adoption and asked why I’d want to find my birth family in Korea, it can be pretty difficult to give an answer but this Odysseus experience sums it up well for which I can give as an answer, given if they’d know about the story of Odysseus and the Virgil.

Here’s what Murakami said at the end:

INTERVIEWER: Disappointment as a rite of passage?

MURAKAMI: Thatâ€™s right. Experience itself is meaning. The protagonist has changed in the course of his experiencesâ€”-thatâ€™s the main thing. Not what he found, but how he changed.

I agree completely with this, that when I visited South Korea for the first time ever, it was the experience that gave me a sense of meaning, rather than what I found. I suppose it was a good thing I was able to keep an open mind, not expecting South Korea to be exactly the same as the U.S. was, or any country for that matter. It’s just what it is, and like everybody else, everyone has their own shortcomings. With that said, I believe I was given up for a reason, and that’s all it matters. The rest of it, is utterly up to me and how shall I want to spend my life.

If you’ve kept up with my posts, you probably could tell I’m a big fan of Murakami. It was from reading his books that I’ve come to the sense of myself, and whatever thoughts I may have in my mind is not all that weird. Like a true fan who wants to bid on lunch auction (worth $1 million or more) with the billionaire Warren Buffett or to shoot a round of golf with Tiger Woods himself, I’d love to run a 10k with Haruki Murakami and have a beer afterwards and discuss on the finer things in life and women. I can only hope I can persuade him to a glass of Sierra Nevada Pale ale, my favorite beer. 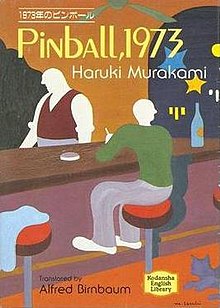