Lately, I’ve been thinking a lot about my dad. I’m not sure why. I think when I was little, I looked up at him highly. My dad had a way of dealing with people like how he feels he can get anything he wanted and he was good at smooth-talking. He once told me a story of how he’d steal a HS basketball star’s girlfriend by talking to her often during halftime at basketball games, then she’d decide that he was more fun to hang around than watching her old boyfriend play basketball. He’d tell me different stories and how adventurous he used to be, riding his motorcycle all over America. It was cool to hear how he’d ridden his bike all the way to San Francisco in 1975, spent 4 nights here and that it would be his last such road trip before he met my mom and got married in 1977 and bought a tiny house together. They had no idea that one day, they would adopt a son. He also told me that when he was in SF, he stopped by a small grocery shop. The guy who owned the shop was an immigrant from Korea and apparently, he knew some sign language, communicated with my dad. He was impressed by that. He wondered what had become of the guy.

Last year, my parents flew to Seoul, Korea for the first time ever and I was excited for them that they were visiting Korea. However, I must admit something was wrong. My dad didn’t look adventurous at all. It was like he was annoyed to be coming here in Korea. Maybe the long 14 hours flight bothered him more than he’d expect. “What the heck are we supposed to do now? How the heck do we get ourselves to the hotel?” he’d ask with a grunt. I was a bit taken back by his sudden remarks and I said don’t worry about that, I’m happy you got here OK.” They got their luggage and we went outside to the front and waited for the bus. I explained to them that there were different buses coming here and we would wait at this spot till our bus came. I realized that at this time, they would be of a minority race visiting a foreign country while I, on the other hand, looked like more like the majority race and knew my way around. I was curious to see how they’d react to this and will my dad still get his way around, like he usually does back in his homeland, America?

We got on the bus and sat in the back. My dad was somewhat impressed by this bus as he sat in a comfortable big chair and the driver started rumbling down the highway. Dad looked a bit more at ease now. Maybe he just had a long flight, I thought. I asked them how do they feel to be in Korea? knowing for a fact that they weren’t exactly frequent world travelers. “It’s a new experience” answered my mom, who always had that little worried look on her face. My dad just nodded and looked like he can hardly wait to check himself into a hotel. Where’s the adventurous spirit? I thought to myself. I don’t think they really knew how much I’ve worked to get myself into this position, getting a chance to work in Korea and for them to have an opportunity to visit the country where I was born in. I paid their airfares.

We finally got into a hotel, got into an elevator, and whizzed up tens of the floors, then finally stopped at my floor. The hotel was actually one of the top premium hotels in Seoul normally where rich businessmen or high-ranking government officials would stay at, so I was fortunate to be a resident here at this hotel. My parents seemed impressed, “This is a nice hotel.”, starting to forget the long flight they’d had. I showed them around the suite room, trying my best to make them feel as comfortable as possible. “There is a nice little 7-11 store downstairs in the basement that has everything from water to wine. Do you want to go down and look?” My dad’s eyes widened, his stiff acting starting to ease up a bit, maybe he’s becoming thirsty now. “Sure, I’d like to go down.” my dad said. My mom wanted to rest a bit and she was already flipping channels on TV, trying her best to find a rerun of Days of Our Lives soap opera, her favorite TV program. There were no U.S. channels on TV. I didn’t tell her that.

My dad and I got into the elevator and when the doors closed, I decided to ask my dad a straight question. “I got the impression that you don’t seem too thrilled to be visiting here in Korea. Was the flight really that long?”

My dad seemed surprised by my direct question, hoping I wouldn’t see his honest expression.

“Yeah, the flight was quite long, I didn’t really have a good sleep and didn’t even get the right whiskey drink I asked the flight attendant to make.” Dad said.

I realized this jet lag was affecting my parents more than I had expected and they’re becoming more grumbled so I let it go and the elevator reached at the bottom. Maybe they weren’t really comfortable with the idea that they’re not in the U.S. and are in a foreign country for a good measure, I thought. It was misleading for them to think that their son was always thrilled to be in the U.S. during the whole time. I knew this would be their such last trip too.

“Do you suppose the Korean guy in the 7-11 would know some sign language?” he asked.

**Dad in the far background, eagerly pulling his luggage. 3 feet of snow was dumped on this day as they were heading back to the U.S. 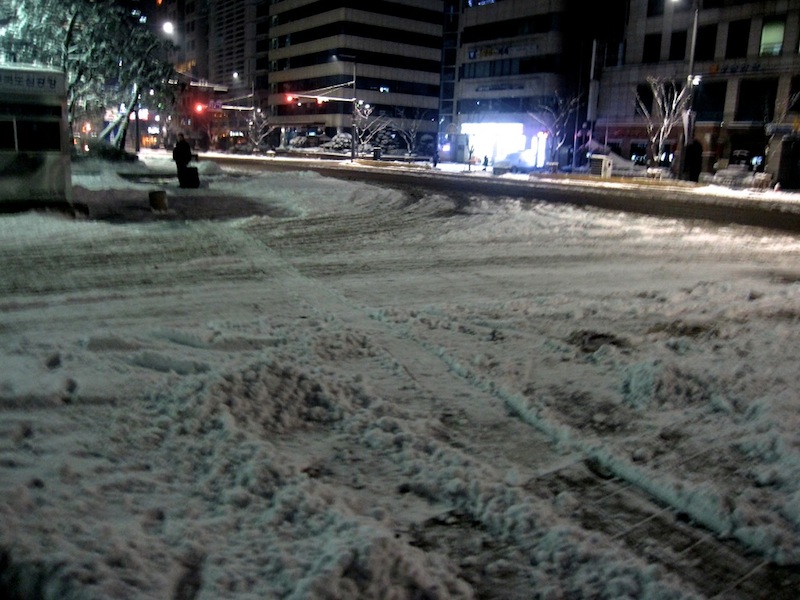 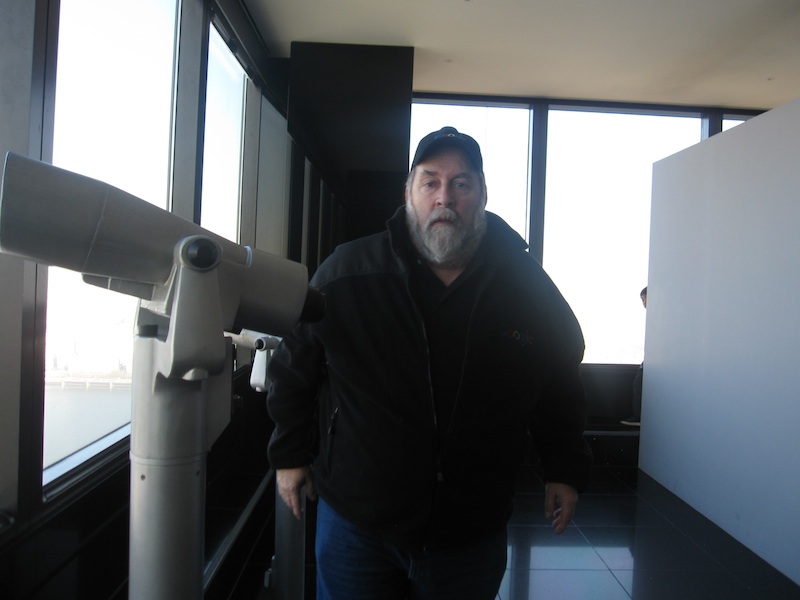